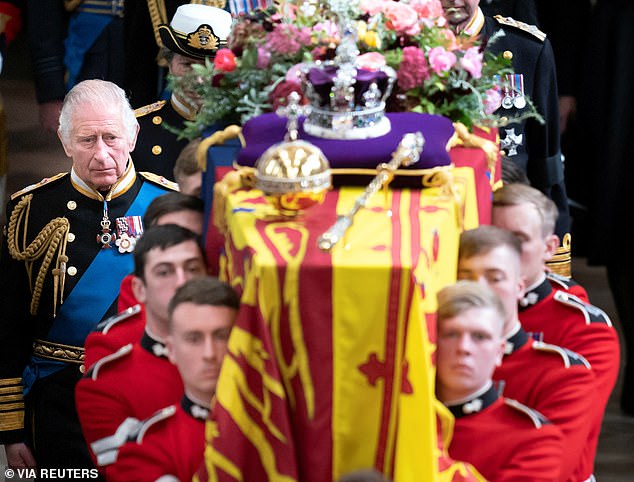 Revealed: The Queen’s crown was attached to her coffin after her grandfather’s bejeweled Maltese cross fell into the gutter during his funeral cortege

By Charlotte Mclaughlin For Mailonline

Her Majesty’s Imperial State Crown, Orb and Scepter that balanced atop the Queen’s coffin were turned down to prevent an earlier historic mishap, it has been revealed.

Back in 1936, George V’s bejeweled Maltese cross – which contains some of the largest jewels in the crown – fell off the gutter as it rested on the coffin during his royal funeral procession.

It was said to have been a bad omen, especially after his son Edward VIII abdicated, leading to a constitutional crisis, a short time later, and was replaced by Queen Elizabeth II’s father, George VI.

So in light of this terrifying moment, the Times said, it was attached along with all the other jewels to the Queen’s coffin while she lay in state and during her funeral so as not to repeat the unfortunate incident.

As a sign of the Queen’s separation from her public service in death, the items were later seen to have been removed by the Crown Jeweler at St George’s Chapel when she entered the Royal Crypt as a ‘mere Christian soul’ rather than monarch.

The Imperial State Crown then rested on the high altar after being removed from the Queen’s casket. It was placed there by The Dean of Windsor, The Rt Revd David Conner.

King Charles III and members of the Royal Family follow behind the coffin of Queen Elizabeth II, draped in the Royal Standard with the Imperial State Crown and the Sovereign’s Orb and Scepter, as it is carried out of Westminster Abbey following her state funeral 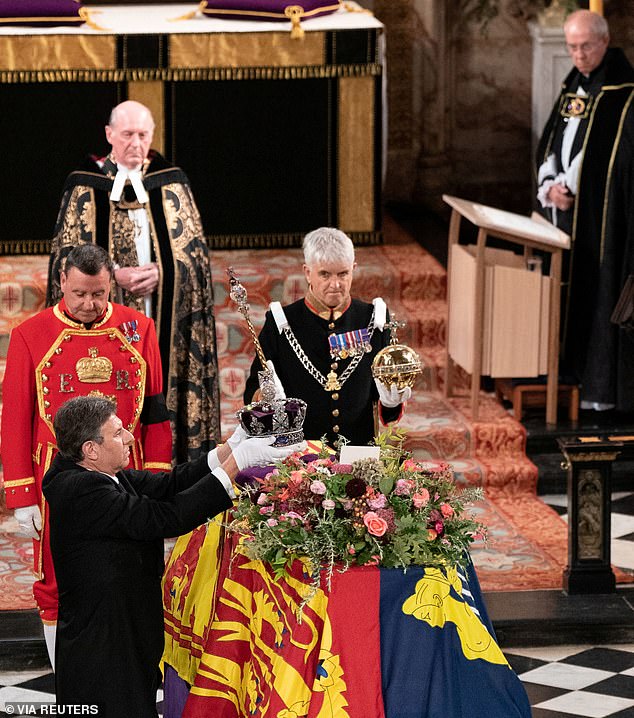 Before the final psalm, the Imperial State Crown, Orb and Scepter were removed from the casket by the Crown Jeweler and, with the Bargemaster and Serjeants-at-Arms, passed to the Dean who placed them on the altar.

The removal of the crown from the coffin to the altar is poignant, for in 1953 the crown was taken from the altar in Westminster Abbey and placed on the Queen’s head, marking the start of a 70-year reign.

At the end of the last hymn, the King placed The Queen’s Company Camp Color of the Grenadier Guards on the coffin.

At the same time, the Lord Chamberlain “broke” his wand and placed it on the coffin – signifying that the Queen was separated from her public service in death.

This is to create symmetry with the three state instruments that have been removed. 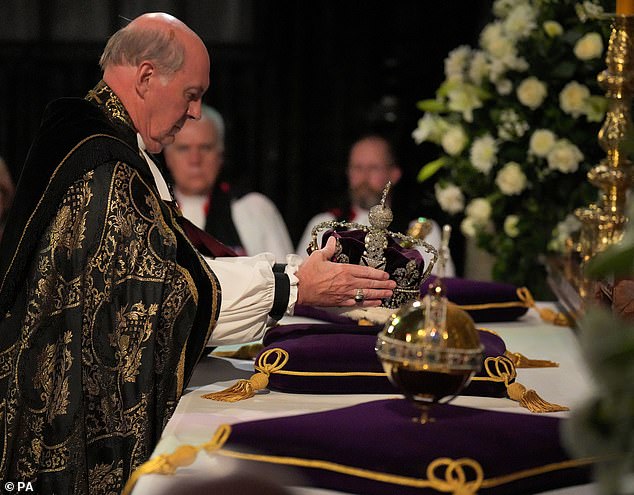 The Dean of Windsor, Rt Revd David Conner, places the Imperial State Crown, and Orb and Scepter on the High Altar during the Committal Service for Queen Elizabeth

The coffin, which was placed on a catafalque draped in purple velvet, was slowly lowered into the royal vault as the Dean of Windsor said: ‘Depart from this world, O Christian soul.’

The Sovereign’s Piper played a dirge, A Salute to the Royal Fendersmith, from the doorway between the chapel and the Dean’s Cloister where he walked slowly towards the Deanery in the Cloister so that the music inside the chapel gradually faded.

During the service, the king will sit in the seat occupied by the queen when she came to the chapel, placed closest to the altar. 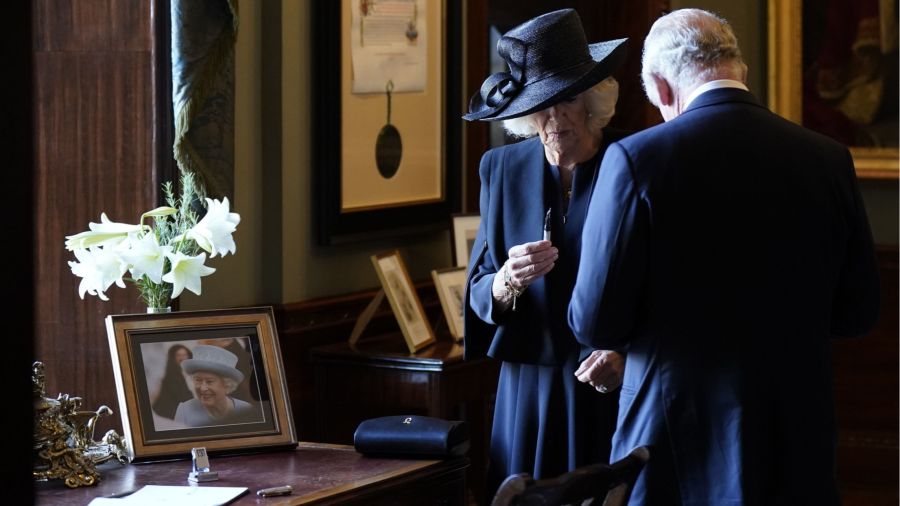 The king’s problems with pens break the royal spell

‘There has been no shutdown’: India mourns Queen but awaits apology | India

El Salvador’s credit plummets, Bitcoin may be partly to blame